Chocolate is not a good choice of subject to talk about at this time of year.  Everybody is fed up either because they've already broken their impossible New Year Resolutions or because they've just jumped on the scales only to discover that somehow they've managed to ingest the weight of a small child over the Christmas period, myself included!


Unfortunately, I've just finished working my way through a huge selection box of milk chocolate naughtiness.  Well, you've got to give into temptation now and again!  So, a piece of dark chocolate is required to put me back on that righteous path to saintliness!  So, what could be better than starting the New Year with a rare Porcelana from Venezuela, produced by Valrhona!

Valrhona - a name that conjours up 'quality'. They are obsessive about making a limited range of products and in comparison to the industrial giants of chocolate, only make a few thousand tons of chocolate each year. It is a little known fact that Valrhona is a subsidiary of Bongrain, a French food conglomerate that is worth billions. If you want to learn more about Valrhona I suggest you buy, Chocolate - A bittersweet Saga of Dark and Light by Mort Rosenblum available on Amazon.

The Chocolate:  This particular bar is made from very special, rare, Porcelana cocoa, a form of Criollo cocoa.  An almost extinct type of cocoa known for its great flavours. 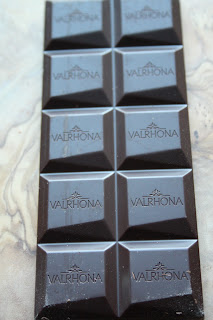 In comparison to the Gran Couva that I tried recently it has a much fruitier taste and acidity that bounces off your tongue. It is also very creamy in texture and has a liquorice hint at the end, not that I could taste it.  The flavour is far more intense and long lasting than the Gran Couva which was fairly 'earthy' in flavour and rather short lived.

Overall a delicious bar of chocolate beating the Gran Couva by a country mile! I award this bar 9/10. You'll have to save your pennies though as this bar is £5.95 for 75g.