With our hopes almost dashed in the World Cup I thought I'd try and divert you from the trials and tribulations of poor passes, missed opportunities and losing formations with some sweet news from Costa Rica and try to lift you out of depression. 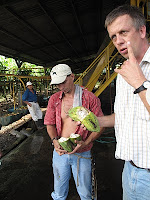 Unfortunately, I haven't won the lottery and I can't be beamed down to Costa Rica from the sunny UK! So I did the next best thing and emailed our man in Guatemala who happens to work for the Rainforest Alliance. Charlie Watson was travelling to Costa Rica and he kindly took my questions to the Hugo Hermelink the owner of Rainforest Alliance Certified farm in Costa Rica where some of our chocolate comes from.
The farm is located in the Carribean lowlands close to the town of and close to National Park Tortuguero. The farm is squeezed in between a banana farm on one side and a pineapple farm on the other side. With Google Earth the farm can be located with coordinates 10.18.58.07"N and 83.35.36.34" O. The farm is owned by the family Hermelink (of Dutch origin).
It took almost 10 years to set up the farm as we started out with inferior genetics for the trees. The farm started it´s transition to organic farming in 2000 and got certified as organic in oct 2003. The Rainforest Alliance Certification started as of September 2006.
We have 29 people working at the farm, of which some 19 for the fieldwork and 8 for the proceing (breaking, fermenting, drying, roasting, grinding liquor) and 2 foreman. The farm also attends some cattle. Most workers have been with the farm for many years (>10 years) and almost half of them live with their family at the farm in houses that the company provides (for free). The other half lives in their own or rented house in the nearby village (Pueblo Nuevo).
The cocoa farm is about 110 ha. We still have another 70-80 ha currently in pasture that we hope to plant with more cacao when our financial resources allow us to do so. Levels of employment at the farm have remained the same since RA certification. 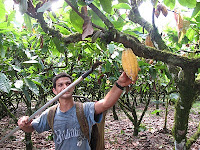 7.  The cocoa plant is notoriously difficult to grow in terms of temperature and  humidity. Is the quality of the soil important to the growth of the cocoa tree. A good quality soil does help to realize a good harvest becuase it provides nutrition, water and oxygen to the roots. The main agronomic difficulties for cocoa in are related to controlling fungus diseases, especially monillia (frosty pod) and phytopthora (mazorca negra). The funguses thrive well under hot and humid conditions!.
The RA states that certification helps protect the local ecology. How can this be proved? I believe certification in most cases confirms that the certified farmer applies good agricultural practises which include protection of natural resources and ecology. In our case, long before certifying with RF the farm was already managed without using chemical pesticides, protecting the streams and forest trees existing at the farm. Rainforest Alliance  Has certification meant that rainforest destruction has ceased in or is it still a huge problem. In general I would say that destruction of rainforest to a large extent has diminished strongly in the last two decades, mostly because a combination of increased public awarene, implementing laws protecting forests and wetlands and the establishment of national and private owned reserves.
How often is the crop harvested and what is the amount of cocoa harvested every year. We
harvest all year round, but with two "peaks", one in December, January and one in May, June and
July. We harvest about 140-150 tons of cocoa beans per year.  Supply of cocoa from can be sporadic is there a reason for this? In the beginning of the 1980´s produced about 11,000 tons of cocoa beans. Most of this was exported. Current production of  is estimated at le than 700 tons/year and most of this production is committed to high-end quality orientated chocolate manufacturers. The limited supply 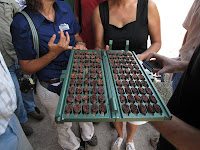 makes the supply sporadic.
What are the plans for the future expansion of the cocoa busineWe are investigating to set up a joint venture for another larger cocoa farm in cooperation with our client. This future farm would undoubtedly be managed similar to our farm, with good agricultural practises, taking good care of our workers and their families, protecting natural resources etc. The new farm would probably combine cocoa growing with the production of (organic) bananas and plantains and poibly coconut trees. Additionally, we would plant shade trees to diversify. Our clients have high ethical standards and no doubt want these high standards be reflected in the operation of the farm.
How much do the employees get paid and how does this relate to the country’s labour rates.
We are currently pay our field workers an hourly rate of 1055 cls/hr, which is just above 2 $/hr.
On top of that as an employer we pay an additional 50% for social charges (health insurance,
accident insurance, pension, 13th month, etc.).
Some 50% of the workers dispose of free decent 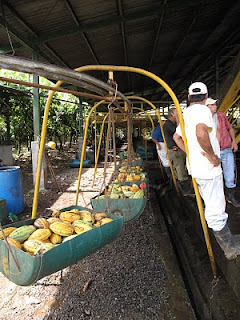 housing at the farm. We are proud of the stability and loyalty of our employees.
How often do the RA visit the farm in a year to ensure standards are being maintained.
The Rainforest Alliance visit the farms officially once a year to do an extensive audit, during which the auditor discues and reviews with personal at all levels (fieldworkers, foreman, farm manager, office worker) numerous aspects of the farm operation using a document called "Norma para Agricultura Sostenible" as a guide line. Non-conformities are noted down. As long as the nonconformities are not critical, the farm will be allowed has a limited time to detail how these non-conformities will be dealt with and of course this will be checked during the next audit.
A big thanks to Hugo Hermelink and his team for providing a great insight into cocoa production in Costa Rica. Plus many thanks to Charlie Watson for providing the lovely pictures!
Posted by Chocchick at 13:47