Hei Cenato - Have you had dinner?

Jason Atherton, ignores recent downturn in the service sector and opens yet another restaurant, Hei Cenato, for our delectation and delight. Temple and Sons, based in the City, opened to rave reviews a few weeks ago and now he's heading south into relatively unknown territory, Nova, Victoria.

This is Jason's first venture into the Italian restaurant scene and I sense a possible theme that could be replicated in other parts of the UK...Jamie Oliver watch your back!

Frustratingly, this restaurant is very hard to find. Located in the middle of a building site and well hidden from obvious view it is only 5 minutes walk (when you know where you're going) from Victoria main line and underground stations.

Nova, is a massive development boasting 17 restaurants. A smorgasbord of culinary delights, including Shake and Shack, Aster, and Greenwoods, to name just 3.

The restaurant officially opens on 7th February but I was lucky enough to have a sneak preview of what to expect. Once through the curtained doorway your straight into the restaurant and immediately two huge pizza ovens grab your attention. This is where all the action is and the closeness of the tables to the kitchen adds to a buzzy but relaxed atmosphere.

The menu is extensive with a wide variety of 'small plate' starters, pizzas, pastas and desserts. Many dishes are available to share. This will suit  the business brigade and hordes of hungry shoppers looking for a glass of Prosecco and pizza combo before heading home. Early morning commuters will also be able to pick up their caffeine shots and pastries to go.

This new venue also has its own bar, The Drunken Oyster, which will serve classic Italian Cocktails with typical Jason Atherton twists.

Starters of Octopus and Black Bean and Sea Bass are beautifully presented on colourful plates. Whilst presentation is fairly minimal and some might even say rustic the overall flavour and tenderness of the octopus was awesome as was the ceviche of Sea Bass which was again full of wonderful flavours.
It should be said that the team are full of energy and keen to explain every element of the menu. Unsurprisingly, they almost all seem to be Italian!
Obviously, pizza, features heavily on the menu. Each pizza is presented on a stand which encourages you to share with your dinner date.

In comparison to a typical New York pizza from Artichoke Basille, these have been scaled down to suit the UK waste lines and it just goes to prove that size isn't everything especially when it comes to pizzas! The fennel sausage topping was delicious and not at all overpowering, perfectly balanced.
﻿﻿ 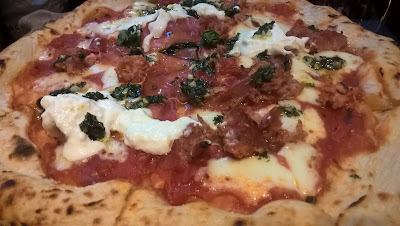 Whilst starters and main courses received high praise I could not say the same for my dessert, Brioche and Gelato Burger,  which had me beaten. It was just too much after pizza. It didn't help that it was also lacking any colour.

Overall a promising start and an enjoyable and tasty meal. Fairly pricey for an Italian. Jason and his team seem to have every hour of the day covered!

Posted by Chocchick at 15:01 No comments: 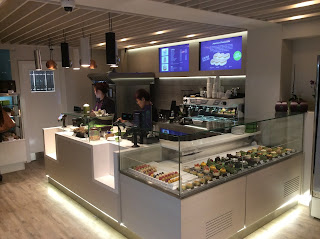 Dark clouds, rain lashing down with no sign of abatement, protected only by a flimsy umbrella that has seen better days, is certainly not the best time to be walking the streets of London in search of new food ideas.

Of course, weather has no impact and does not deter the serious foodie from its quarry, no matter what is thrown at you the prize will always be obtained. New Row is just off St Martin's Lane in Covent Garden. Business was 'slack' and dribbling much like the rain...

Pan de Vie is relatively new to the food scene in London according to the Catersales website, opening in December, 2015. Pan de Vie, described as a French-Chinese fusion offering good coffee and even better patisserie. Their website is still under construction. 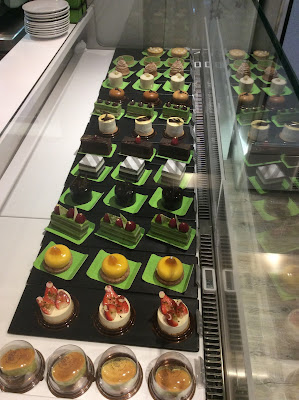 The shop is bright, with white counter tops and good lighting around the main counter. My only criticism would be that the lighting in the corner requires a torch in order to see some very interesting baking products including: Japanese Matcha Melon Bread; Japanese Beef Curry Bread; Cherry Bacon Mayo Bread; Japanese Chicken Teriyaki Bread. 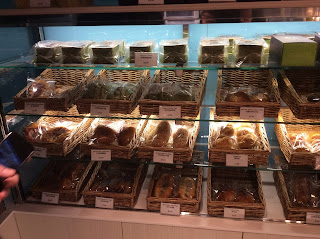 All items are ready to grab and go priced from £1.95 upwards. I was slightly alarmed that many of these products were not chilled...one can only assume a coach load of Japanese tourists were due in soon! Great blocks of Matcha Castella, a popular Japanese honey-sponge cake, were on sale at £8.95, gift boxes available. 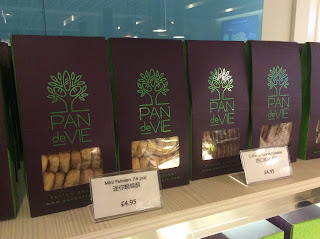 Two employees were working in the shop on the day of our visit both extremely well presented, engaging and obviously loved their jobs!

Across the road from Pan de Vie is the Jamaica Patty Co. Jamaican food

has been around for a long time but has kept a low profile. This was one of the main reasons that Jamaican born Theresa Roberts decided to open her business, frustrated by a limited Jamaican food offering on the high street, JPC came to fruition in 2013. 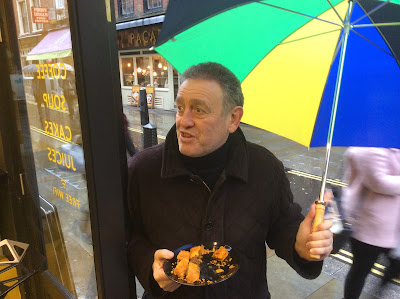 Unlike Cornish pasties the crust is made with Tumeric to give it's distinctive colour. Fillings include, Jerk Chicken; Beef; Spicy Beef, Curried Goat and Vegetable. The owners other half was braving the rain providing samples on the day... and very tasty they were indeed. Having a sweet tooth meant that the Tortuga Rum cake was to die for! 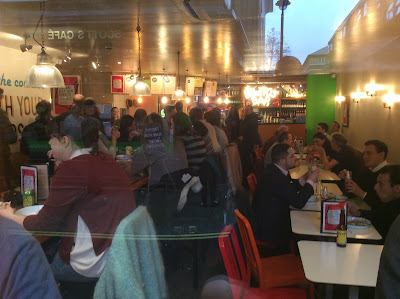 Interestingly, at the top of New Row you will find Benito's Hat a bustling Burritos bar which was doing a roaring trade on this wet and grey day, selling tacos and Mexican tapas all washed down with a Margarita cocktail or a chilled bottled beer. Posted by Spike.
Posted by Chocchick at 11:44 No comments: 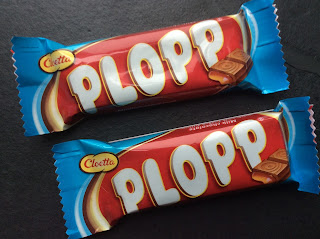 PLOPP...yes, you did read that correctly.

Plopp, is a popular Swedish chocolate bar but alas I had never come across these humorously named bars until I met the guys from Hej Coffee who were handing out some freebies at a recent event, much to me delight.  How can anyone make it through the day without a Plopp?! Ok, I promise to keep the lavatorial jokes to a minimum.

Plopp, produced by Cloetta, founded in 1862, is a leading confectionery company in the Nordic region, employing 2,500 people, 6 countries, according to their website. Plopp was created in 1949 as a small bar and has been improved upon ever since with interesting flavour additions such as Liquorice; Currant; Caffe Latte and Tutti Fruitti. Has anybody tried these?

Unfortunately, I left my Plopp sitting in the baking July sunshine and you know what that means. A few minutes in the fridge helped rescue my melting bar! Fortunately, its taste was not impaired by being zapped by the sun. Overall, this is a pleasant and not too sweet, milk chocolate and soft caramel snack.


Totally Swedish sell this chocolate bar which is available online or in their stores located in Marylebone and Barnes. Totally Swedish provide anything from herring to books in an attempt to satisfy our lust for all things Swedish and of course the many Swedes that have made London their new home and might feel a little homesick. To buy online click here
Posted by Chocchick at 18:13 No comments: