70% Dark Chocolate with Ginger and Orange

I must admit that before I started writing this blog I did not know a lot about Divine. However, the more Divine chocolate I review the greater understanding I have of their company. Which can only be a good thing. Divine: What and who is Kuapa Kokoo? To explain this I've just quoted what is on their website, as follows:


Supported by Twin and SNV, a Dutch NGO, they set up their own company to buy their cocoa and sell it on to the Government Cocoa Buying Board. The cocoa farmers' organisation was founded and named "Kuapa Kokoo" which in the local language, Twi, means "Good Cocoa Farmers Company". Their motto is "Pa Pa Paa" which means "the best of the best of the best".

The organisation is for farmers and set up by them with the mission to effect:

* increased power and representation within the market for the farmers
* social, economic and political empowerment
* enhanced women's participation in all its affairs
* environmentally sustainable production processes

Kuapa Kokoo Farmers Trust
Responsible for distributing money for community projects, generated from the fair trade premium between the farmers.

The Chocolate: This is a 70% dark chocolate with added orange granules and ginger flavouring. In total 89% of the ingredients are certified to International Fairtrade standards. All Divine chocolate is made in Germany using Ghanaian cocoa. Ginger is the main aroma that comes through as you open up the packaging. The chocolate is well tempered, bright in colour and has a good snap. The cocoa provides a good back drop for the ginger and orange flavours. The granules of orange are a bit off putting as you feel as though you've eaten a fruit gum which is not a good marriage. 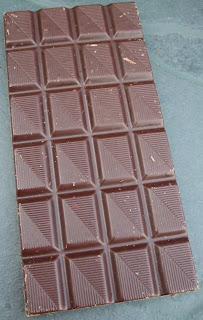 This is a reasonable bar of chocolate but I think they could have done better by adding real pieces of ginger. Considering they go to so much trouble sourcing fairtrade products why don't they try a little bit harder with the other ingredients. Overall I give this bar 5/10 for flavour which comes across as being a bit artificial and 10/10 for ethical policy.