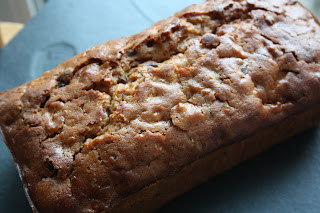 Friendship cake has been around for years.  In fact, I can remember a next door neighbour bringing my mother a batch to our back door almost 40 years ago, perhaps she should have kindly declined and shut the door.
But that's not very neighbourly is it?

Apparently, 'Herman the German' has gone viral and "Friendship-Kuchen", as I'm now calling it is moving swiftly from one house to another with only one thing on its mind, global cake domination.  I actually believe that Herman is Frau Merkel, the German Chancellor and in a last ditch attempt to rescue the Euro she has gone on a charm offensive handing out pots of Friendship-Kuchen to senior dignitaries of the Euro countries.  I'm sure Carla Bruni-Sarkozy is handy in the kitchen.

So, motivated and uplifted by the recent Celebrity Bake Off I thought I'd give it a go. How difficult can it be? If you've not had the pleasure of making this cake you should be aware that it has a very strange appearance.  I could not bring myself to describe it as my husband suggested!  It is a milky, sloppy, blob which has about as much going for it as road kill.

Each Friendship-Kuchen comes with a set of instructions and a recipe that has a time span of several days, in fact it takes 10 days.  I have a problem making a recipe that takes 10 minutes!  For some unknown reason it has also been christened Herman.  How did that happen?  The cake originated from the United States many years ago allegedly where they call it Amish Friendship Bread.  Interestingly many people have claimed responsibility for this sour-dough cake.  Unbelievably, a girl scout, obviously trying to achieve a 'baking' badge to beat all badges was responsible for the blob that now crosses our doorsteps.  Like a vampire you have to invite it in and that's when the fun really starts.

The life of my little Herman was nearly cut short by my health and safety conscious husband  who thought it was time to throw this strange, bubbling gunk, that probably originated from an offspring's bedroom, into the recycling bin where it rightly belonged!  Fortunately, he had second thoughts and left Herman to multiply and prosper as a happy yeast should do.

How to birth your own Herman Friendship-Kuchen

Firstly, get hold of your Herman. Assuming you have friends this step should be easy.

Hello my name is Herman. Yes, he's talking to you!

I am a sour-dough cake I live on your worktop for 10 days without a lid on. I cannot go in the fridge or I will die. If I stop bubbling then I am dead.

Mix everything together and put into a large greased baking tin. Sprinkle with a quarter of a cup of brown sugar and a quarter cup of melted butter. Bake for 45 minutes at 170-180c. When cold cut into finger pieces. Cake freezes well and is delicious warm with cream or ice-cream.

I did omit the topping of sugar and butter and it was delicious without!  The only problem now is that I can't stop eating it!

Being protective of my family of Hermans I only gave away two and baked two varying the ingredients by replacing apples and cinnamon with banana, pecan and mixed spice....Yummy!
Posted by Chocchick at 16:01