Southwold has become so popular at weekends that Southwold District Council has introduced a 'one-way' system on both sides of the high street to deal with high volumes of pedestrian traffic.

Later in the year they, SDC, plan to pedestrianise the whole high street, from dawn til dusk, giving power to people rather than cars and lorries.

Many locals have given up shopping at the weekend having been forced or should that be shouldered once too often, into the gutter by a spotty 'Sebastian' or pre-pubescent 'Jemima' who has decided to go off in a tiff, forgetting that eighty year-olds don't bounce like they used to.

Buying tickets to a Rolling Stones concert is probably easier than trying to find a seat at Two Magpies Bakery.

This artisan bakery, patisserie and coffee house has been going from strength to strength since it was opened a couple of years ago by Jim and Rebecca Bishop. Jim, an army bomb disposal expert for many years and Rebecca a teacher in a previous life. Jim, learned his trade with stints at various artisan bakeries throughout the UK including Pump Street Bakery another delicious Suffolk baker.

Business has certainly not bombed (sorry) having seen the queue for bread at 9am on Easter Sunday winding its way down the high street. It reminded me of the days when people used to queue for butter buns at the other end of Southwold high street many years ago. 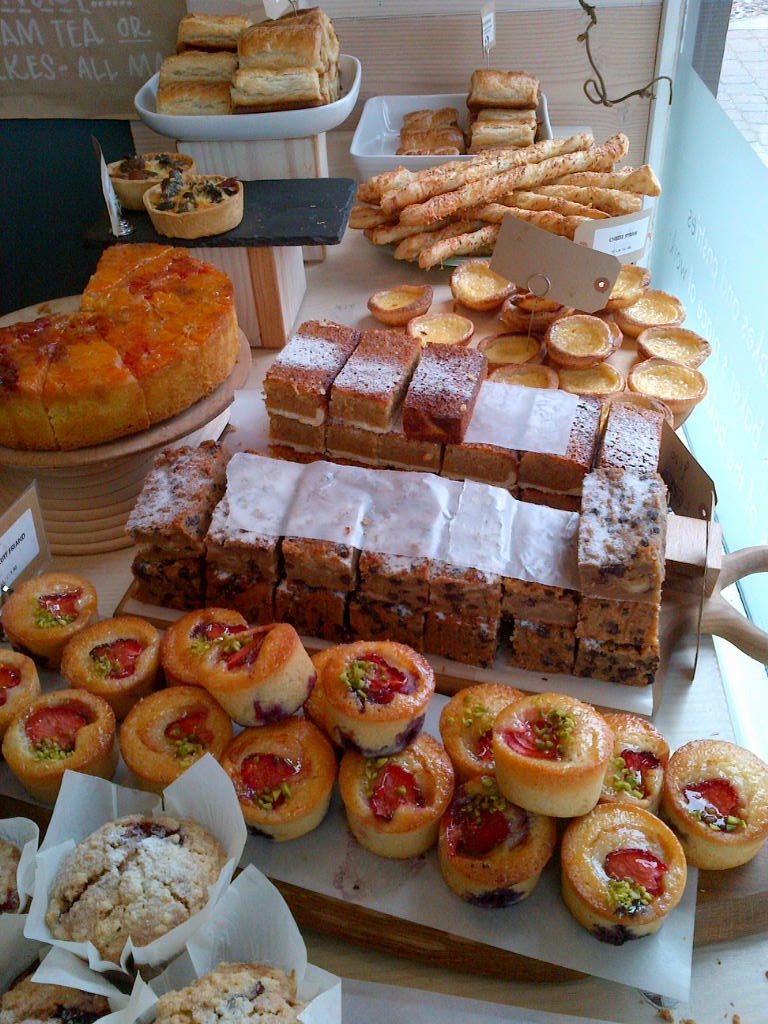 I'm not sure Jim and Rebecca could have found a narrower shop in which to build their business. Designed by Paul Croft Studios of London, they have used a magpie's nest and douglas fir as their inspiration. Being narrow means you are close to the action and if you are at the right height a cake in the face is not impossible! Handcrafted breads made using flour from Marriages, Essex, also looked amazing. I'm sure we will be back to sample a few loaves later in the year. Coffee also has that artisan feel and sure enough they buy their beans from Allpress a coffee roaster in Shoreditch, London.

The team are young and well trained with plenty of smiles and almost 'lusty' with their enthusiasm for their patisserie delights. It certainly has a London feel and the informal communal seating is reminiscent of places such as NOTES of Soho and Monmouth of Borough Market.

As the place was packed we had a takeaway of Salted Caramel Brownies, Mixed Fruit Muffins and Hot Cross Buns. All were delicious, however, the jewel in the crown were the Hot Cross Buns which were sublime. Pricey yes, but, when you consider the offerings available in other shops I for one would gladly pay a few pence more for quality.

Psst, the bit about the pedestrianisation of the high street was just wishful thinking.....
Posted by Chocchick at 13:57